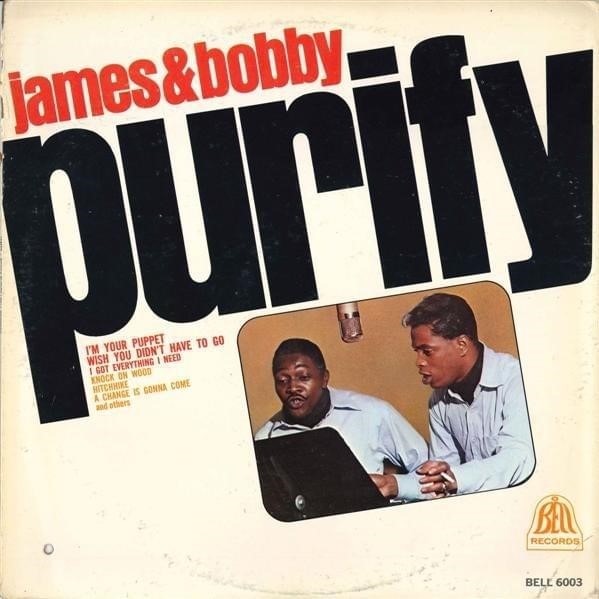 JAMES AND BOBBY PURIFY shot to fame in late 1966 with their debut single for Bell Records, ‘I’m Your Puppet’,which quickly became established as a soul classic.

Written by Dan Penn and Spooner Oldham, the song was a smash hit, reaching the US Top 10 Pop and R&B Billboard charts, and was nominated for a Grammy. Thereafter, the pair recorded two albums and several singles for Bell before eventually leaving Bell in 1968.

Named after their biggest hit, I’M YOUR PUPPET includes all of James And Bobby Purify’s recordings during that dizzy two year period, including both LPs, all non-album tracks and a clutch of recordings which only surfaced in 2002. Many tracks are currently unavailable on CD.

This worthwhile double-CD set shines a welcome light on one of the classiest soul duos of the Sixties – cousins James Purify and Robert Dickey, who harked from Florida and were discovered by producer Don Schroeder.

After disbanding, James Purify worked as a solo singer before forming a new-look James & Bobby Purify with new singing partner Ben Moore, recording for Casablanca Records and enjoying renewed success with a re-recorded version of ‘I’m Your Puppet’ in 1976. The pair continued to tour well into the 1980s. While James also continued with a solo career, Bobby did likewise (with encouragement from Ray Charles) and eventually joined acclaimed gospel outfit The Five Blind Boys Of Alabama.